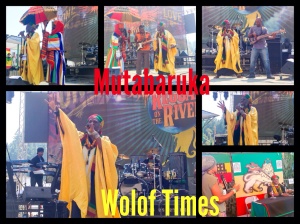 Mutabaruka is the Afrocentric voice of Reggae through his spoken word. He delivered very conscious poetry which touched various social issues ranging from Politics, Human rights with an emphasis on Black & Women’s rights, Religion, Food, Health, Nutrition and the legalization of Marijuana. He discussed the latter issue in-depth, during the post-show press conference, though he does not smoke himself. Mutabaruka is by essence an African philosopher, a very critical thinker who can be very humorous. This is demonstrated with his “The Monkey speaks his mind” song, where he criticizes mankind. He performed barefoot and in Traditional African Muslim attire though a Rastafarian. He was accompanied during his performance by a “Moor” holding an umbrella, conveying the image of a traditional African King from the 19th century. His band delivered cutting-edge Roots Reggae that were danceable though Mutabaruka is by essence a spoken word artist.