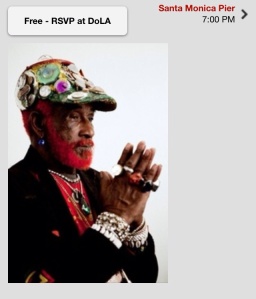 Twilight Concert Series 2014
Lee “Scratch” Perry
The Godfather of Dub and Reggae has returned…. Grammy Winning Reggae Icon Lee ‘Scratch’ Perry’s returns with the highly anticipated new LP “REPENTANCE”– with the sexually charged club anthem “Pum Pum,” as the debut single which demonstrates Lee’s mastery of all sounds. The album touches on a multitude of genres ranging from hip-hop & dancehall to club ready dance hits. By now you’ve heard the story that’s been followed by major music outlets from Billboard to Pitchfork. Starting with a chance meeting between Perry and hyper-energetic artist/producer Andrew W.K. at SXSW in 2006 that spawned an unthinkable friendship leading to a musical collaboration that would result in Lee Perry’s latest studio album. “Repentance” is considered the best album he has produced in decades, standing alongside the innovative records of the 60’s & 70’s where Perry placed the DJ in the role of the artist. What Perry created can easily be seen as the prelude to the dance, hip hop and pop music genres which makes it easy to see where artists from Jay Z,,Santogold, Hot Chip, M.I.A., to Spank Rock cut their teeth and found their sound. With “Repentance,” Perry has truly reclaimed the thrown. He continues to influence the musical landscape of today by redefining every genre of music he touches with his unprecedented vision and production expertise. He remains revered by his peers and seen as one of the most influential artists by many of today’s contemporary performers. Guest artists include electronic maven Moby, seminal producer Don Fleming, bassist Josh Werner of Matisyahu, drummer Brian Chippendale of staccato noise duo Lightning Bolt! and adult entertainer Sasha Grey.

Mexico68
Collectively aesthetic! MEXICO68, is a (13) piece afrobeat band based out of Los Angeles’ Eastside, California and is heavily influenced by the polyrhythmic sounds of Nigerian Recording Artist, Fela Anikulapo Kuti and Africa 70. Dominating the underground airwaves far and wide, MEXICO68 juxtaposes chicano funk with the body-moving and elucidating vibes of Fela. “Afrobeat will be one of the musics of the future” -Miles Davis Afrobeat no go die!