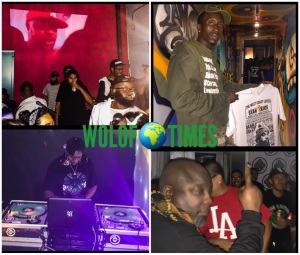 This event was organized to pay tribute to one of the best Hip Hop Lyricists ever Sean Price aka Sean P, half of Heltah Skeltah and member of the Boot Camp Clik…Rest in Peace! The event featured a DJ who played classic Sean P and East Coast tracks throughout  the night (9pm-4am) and various local MCs also performed. There was a food caterer, vendors with Sean P apparel and CDs as well as an outdoor projector displaying the Brooklyn/Brownsville rapper videos. The Hip Hop venue, located in Chinatown, was punctuated with graffitis and offered a Basement-like/Underground atmosphere with an East Coast flavor enhanced by the DJ’s tracks. All proceeds from the event will go to the deceased MC’s family. Sean Price was an enigmatic real MC with lyrical skills who never compromised his music and was never afraid to speak his mind. Hip hop has suffered a great loss and he will most surely be missed.

Donations can be made to Sean Price’s family via this Duck Down Music sponsored link: http://www.crowdrise.com/seanp 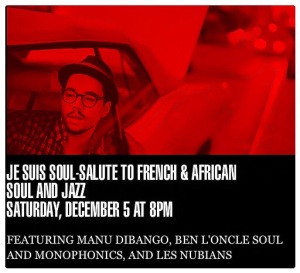 FEATURING MANU DIBANGO, BEN L’ONCLE SOUL AND MONOPHONICS, AND LES NUBIANS
In  interconnected global village, the soul of today’s musical soupcon is rooted in the multiple strands of the African diaspora. This weekend celebrates Africa’s gift of soul and its musical manifestations throughout the Americas and France.

This weekend of events celebrates the 35th Anniversary of the Jazz Á Vienne Festival. Founded in 1980, Jazz à Vienne is one of the world’s premiere music festivals. This annual, three week festival stretches from mid June to July and features a mix of gospel, soul,
funk, blues, groove and, of course, jazz. In July 2014, the Festival celebrated the Apollo Theater’s 80th anniversary in its 7,500 seat Roman amphitheater. 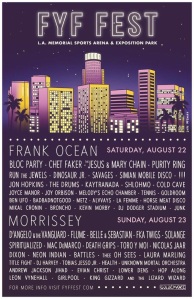 Check the FYF Festival! You may purchase tickets here: http://www.fyffest.com

New Reggae Festival created by the organizers of the Cali Roots Festival. You can get more info and purchase tickets here: http://www.drydiggingsfestival.com

The Joshua Tree Music Festivals are produced by a family of friends and funsters convinced that music is the soul of life, and that art enriches and saves lives.
That experience is enhanced when embraced in the great outdoors amongst fellow music lovers. Better still in an intimate setting, where the distinction between artist and audience is blurred, and a passionate performance can be truly relished in close proximity to the stage. Add FREE water to patrons, no service charges on reasonably priced tickets, and well … let the games begin. You can purchase tickets here: http://www.joshuatreemusicfestival.com

Bob Marley’s 70th Birthday Celebration at the historical Hollywood Bowl was sold out, which shows how influential and relevant this cultural icon still is with older and newer generations. Bob’s children Ziggy and Stephen, who were trained with their off and on stage appearances by their legendary father, can be held as responsible for keeping their father’s legacy alive with the newer generation. This through their music and mentoring of younger stars Damian, Julian and Kymani. Ziggy and Stephen strictly performed their father’s classic songs such as Redemption Song, Iron Lion, Crazy Balhead, One Love just to name a few, much to the crowd’s delight that knew all of the words. The legacy of Bob will also be kept alive with future generations with grandsons Jomersa (Stephen’s son) and Skip (Cedella’s son) Marley who also performed briefly. This was clearly a celebration as the place was jam-packed and live with great crowd participation. Ziggy and Stephen were seemingly very excited and proud to represent their father. The Skatalites and Inner Circle were great choices in opening the event as they also represented the Ska to Reggae transition from the 60s to the 70s which Bob Marley was a part of.

Bhakti Fest is the premier yoga, sacred music, and personal growth festival in the United States. Since 2009, for six days each September, we have featured the best Yoga Teachers, Kirtan Musicians, and Workshop Leaders in the world. We are part of the Center for Spiritual Studies, a 501c3 nonprofit that supports charities across the globe, mainly in India. Proceeds generated each year, after we cover our costs, go to our chosen causes. We accept donations to help us provide extraordinary festivals and give support to those less fortunate than us. We invite you to view our gallery. We hope to see you in the Bhav!

You can view our gallery and purchase tickets here: http://www.bhaktifest.com 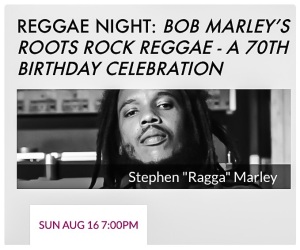 For this year’s reggae party, sons Ziggy and Stephen Marley lead the celebration of their legendary father’s 70th birthday and the best of the roots rock tradition. They will be joined by Inner Circle and the Skatalites with KCRW’s Jeremy Sole as a host. Tickets can be purchased on: http://www.hollywoodbowl.com/tickets/reggae-night-bob-marleys-roots-rock-reggae-70th-birthday-celebration/2015-08-16 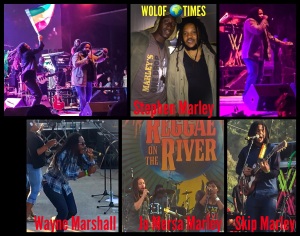 Stephen Marley was definitely the highlight of the festival and delivered by far the best musical and vocal performance with his trademark Marley lionesque voice. He delivered classic Bob tunes such as “Iron Lion” and his newest hits “Rock stone” and “No cigarette smoking in my room” much to the great delight of the crowd. His protégés known as the Ghetto Youths Crew performed before him with Wayne Marshall somewhat reminiscent of Dennis Brown (Bob’s favorite artist) in looks and voice and rendering a funny version of “Southern California” which revolved around Ganja and police search, Jo Mersa (Stephen’s son) is more on the Dancehall Ragga side while Skip (Cedella’s son) is definitely very reminiscent of his grandfather Bob and uncle Stephen in his singing style and guitar-playing. This was definitely the event that showcased the next Marley generation. 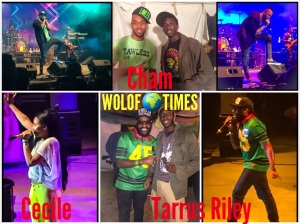 Baby Cham now officially Cham performed for the first time at Reggae on The River 20 years ago and arguably had the best performance of the Festival with his gruffy voice, hyper dance & energy as well as lyrical ability. Cecile gave a Rihanna/Beyonce-like sexy performance much to the delight of the male audience but also addressed female relationship issues. Tarrus Riley is a true singer and did that to the best of his ability with conscious and love lyrics, while acknowledging his 90s Dancehall roots. He also paid homage to the greats such as Michael Jackson with his rendition of “Billie Jean”.

Collie Budz delivered a great performance setting things off on Friday night while Alborosie closed out the Festival majestically and beautifully on Sunday night, proving Reggae transcends all racial boundaries as both artists are able to sing in Patois. Collie Budz sang his Dancehall anthems “Come around”, “Blind to you Haters” and enchanting rendition of Peter Tosh’s “Legalize it” which all give him much street credibility and respect. Alborosie is a true and energetic entertainer with his trademark thick dreadlocks which nearly touch the ground, he also utilizes them to poke fun at the crowd by using them as a firing weapon or rope which makes his own musicians laugh. His voice is lionesque and reminiscent of Buju Banton’s. Alborosie delivered great renditions of “Police in Helicopter” & “Crazy Baldhead” and even sang Italian opera, showing his range as an artist and celebrating his roots.

The 31st Annual Reggae Festival featured an international and eclectic cast of artists from African countries such as the Sudan and Mali. Sudanese rapper and spoken word artist Emmanuel Jal offered conscious radical lyrics meant to awaken the crowd regarding the socio-political issues of his country which include war, violence and child exploitation with his poignant life story as a child soldier and refugee. He received numerous accolades and crowd participation. The Malian Family Ensemble which featured husband and wife Bassekou Kouyate and Ngoni Ba enchanted the crowd with their original Malian Blues singing, guitar and percussion using traditional instruments. You could clearly see and hear the African influence on Blues and Rock N’ Roll with the Jimmy Hendrix-like guitar-playing as well as sultry voice of Ngoni Ba. The youngest members of the Family ensemble also performed so well and energetically at the traditional guitars and talking drums that the crowd demanded an encore.

The 31st Annual Reggae On The River, longest running American Reggae Festival, featured 70s & 80s Conscious Roots powerhouses such as King Jammys Sound System, Don Carlos Ex Black Uhuru lead singer and founder as well as The Congos. These acts proved once again Reggae and consciousness are timeless and social issues of those times are still relevant. The Festival organizers did well mobilizing groups of different eras and geographical areas to please the diverse festival attendees.