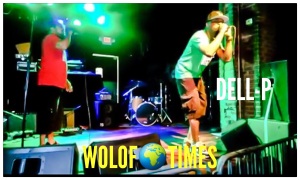 Who is Dell-P??? I was recently at Voltage Lounge in Center City Philadelphia, where I had the great privilege to come across one of the Dopest and Livest Hip Hop Artists called Dell-P. His song delivery leaves the audience no choice other than feeling the passion, anger, love and rawness of his lyrics. As he performed, I glanced around at the crowd, and all were doing the classic Hip Hop Head Bob in unison, which was awesome.

Dell-P is the true definition of Hip Hop. A West Philadelphia native who isn’t afraid to create his own lane and refuses to conform to the new waves of the industry . Dell-P has a lot of great things currently happening for him as well as on the horizon.

Dell-P has performed at many premier locations in the Philadelphia area including the TLA and the Wells Fargo Center. His musical talents have granted him the opportunity to open up for hip-hop acts such as DMX, Slum Village, Rich Boy, Fabolous, and State Property. With this resume, there is no question as to why XXL Magazine and This Is 50.Com have named Dell-P one of the best kept secrets of Hip Hop…

Dell-P dropped his new project this summer on the WHOMAG/SONY Distribution imprint, and from the comments on iTunes his project “A New Beginning” is exactly what he’s got in store for Hip-Hop as he sees it. There are some like minds out there hungry and “A New Beginning” feeds them properly. Once you take a listen to the music, you will understand why Dell-P has been called “the best kept secret of Hip Hop” by XXL Magazine… Feel free to follow Dell-P on IG & TWITTER @DELLP215

I firmly believe that Dell-P is an artist that every true Hip Hop lover should definitely support by purchasing his albums and attending his shows, given the current state of Hip hop.  If you thought this art form was dead, Dell-P is here to let you know its a New Beginning…

Khadijah Yayefall Ndiaye is a Worldwide reporter and photographer, based in Philadelphia, for Wolof Times.